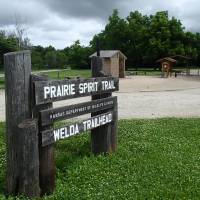 Welda is an unincorporated community located in Anderson County, Kansas. The town was established in the 1870s. At one time the town had numerous businesses, schools, and churches, but today it’s a sleepy little stop with a population of about 120.

Welda’s trailhead for the Prairie Spirit Trail features the typical amenities, such as picnic tables, seasonal water and restrooms, and a self-pay station and kiosk.

Welda is located at about mile marker 91.0

Directions North and South From Welda

North: Garnett (7.5 miles)
This section of the trail is more isolated than the rest. Starting out of Welda you will begin dropping towards Garnett. Soon you will see a truck stop off to your right. As you cross over Highway 169, start to keep your eyes open to your left for Crystal Lake.

South: Colony (7.8 miles)
Leaving Welda the trail passes underneath Highway 169 and proceeds to the southwest between the highway and Old Colony Road. There is a slight rise during the 9 miles to Colony that mirrors the same type of climb that was felt during the last miles into Welda from Garnett. As with most of the trail the path is quite straight and you can often see the trail all the way to the horizon. Generally you will see open prairie along this segment with lazy hills on either side of you. As you approach Colony you will see more scrub on either side of the trail.

Services along the Prairie Spirit Trail in Welda