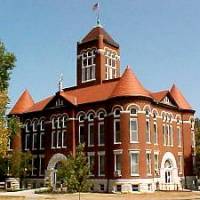 Garnett is the county seat of Anderson County, home to about 3415 people (2010 census). Garnett is the third-largest town along the Prairie Spirit Trail with many services for the weary biker. Garnett’s downtown, adjacent to the trail, is especially nice, and additional services are located along Highway 59 about five blocks west of the trail.

Garnett features one actual trailhead and two other popular jumping-on (or off) points. The first is Lake Garnett, at mile marker 81.8, which features camping and other amenities. The second is the Old Santa Fe Depot trailhead just south of downtown, a restored historic depot, at mile marker 82.8. The third is Crystal Lake, at mile marker 83.5, which offers additional camping opportunities.

Directions North and South From Garnett

North: Scipio (5.7 miles)
Riding north from Garnett, as you enter the trees you will see the terrain to the right drop off precipitously. You will continue on a downward path until you have crossed two bridges that go over Pottawatomie Creek. After this point the trail will continue to rise as you approach Scipio Road.

South: Welda (7.5 miles)
Riding south, you soon cross over an old railroad overpass that traverses Highway 59. As you do you see a truck stop to your left and a roundabout that marks the intersection of Highways 59 and 169. They merge at this point and when you meet the road again at Welda it will just be 169. This section of the trail is more isolated than the rest and a gradual climb all the way to Welda.

Services along the Prairie Spirit Trail in Garnett