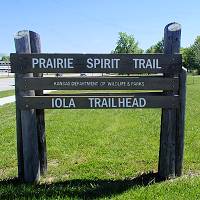 Iola is the second-largest community along the Prairie Spirit Trail (population 5704 as of 2010), and is the county seat of Allen County. As such, it has many services, amenities, and points of interest for travelers.

Iola has one official trailhead, at Cofachique Park, near the intersection with State Street (old Highway 169) at Mile Marker 108.6. When the Prairie Spirit Trail first opened in Iola in 2008, Cofachique Park was the “end of the line”, but the city extend the trail another mile-plus, to Riverside Park (mile marker 109.7). Volunteers with Thrive Allen County then created the Southwind Rail Trail heading south from Iola to Humboldt, another 6.5 miles. The Southwind opened in 2013. Riverside Park serves as a second defacto trailhead.

In 2014, Iola added sharrows on some of their streets as an aid in guiding trail users downtown. The sharrows run along Washington Avenue, and connect to the Prairie Spirit Trail at West Street and at Riverside Drive.

In 2015, Iola added the Missouri Pacific Recreational Trail, which follows the old Missouri Pacific Railroad right-of-way east into town. The Mo-Pac Trail connects to the Prairie Spirit Trail at about mile marker 109.

Directions North and South From Iola

North: Carlyle (4.3 miles)
Heading north from Iola, the trail transitions from the city’s paved surface to crushed limestone at the city limit. The ride north features some nice farms on either side of the trail which can be spotted through the trees. Most notable along this stretch is a long bridge over two intersecting roads and a stream. The roads are made to be easily floodable during a heavy rain. Within Iola, the trail is free to use and paved. North of Iola’s city limit, the surface is crushed limestone, and requires a permit.

South: Bassett (1.0 miles)
Although the stretch from Iola to Humboldt is part of the same contiguous trail, the name changes from the Prairie Spirit Trail to the Southwind Rail Trail. The Southwind was built by volunteers with Thrive Allen County. The distance between Iola and Bassett is very short, but this segment features the most impressive bridge along the entire corridor, the magnificent Elm Creek Bridge. The Southwind Rail Trail is free to use, requiring no permit. The Lehigh Portland Trails also connect to the Southwind, just south of the Elm Creek Trestle Bridge.

Services along the Prairie Spirit Trail in Iola