The Major General Frederick Funston Boyhood Home and Museum tell the life story of Frederick Funston. Known as the “Man Who Saved San Francisco” during the 1906 Earthquake and Fire, Funston was also a traveler, explorer, botanist, and a three star general in the United States Army. Standing at only 5’4″, Funston was the commanding officer for Eisenhower, MacArthur, and Pershing. The Boyhood Home is exhibited with furniture of the period of Funston’s childhood. 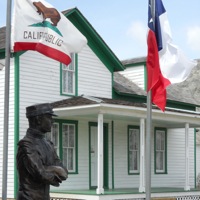