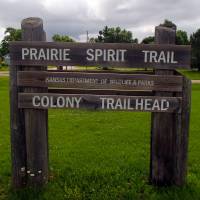 Colony is a small community located along the trail in southern Anderson County. It had a population of 408 as of the 2010 census. Colony was founded in 1870 on an eminence known as High Divide or Ozark Ridge, dividing the waters of the Arkansas and Missouri rivers. It is the highest point in elevation on the trail.

Colony is the hometown of novelist and poet Max Yoho, who was born in 1934, and pedaled his bicycle around Colony carefully observing small town Midwestern life. Two of of Yoho’s novels, The Revival and The Moon Butter Route, are set in the town of “Epic”, which bear’s a striking resemblance to Yoho’s hometown.

Directions North and South From Colony

North: Welda (7.8 miles)
Riding North: The elevation gradually descends from Colony to Welda. This section of the trail parallels US-169 highway, and is mostly open and straight. Generally you will see open prairie along this segment with lazy hills on either side of you. You’ll pass through a tunnel beneath US-169 just before you get to Welda.

South: Carlyle (5.6 miles)
Riding South: The trail between Colony and Carlyle is one of the steeper grades of the trail. If you are heading south you will find yourself keeping up a pretty good clip as you start to exit Colony. The trail is fairly open for several miles until it passes underneath the highway. At that point you almost immediately enter a wooded area that continues all the way to Carlyle. Once you enter the woods the grade lessens.

Services along the Prairie Spirit Trail in Colony