Located in downtown Colony, just east of the Prairie Spirit Trail, this country cafe offers a variety of foods from breakfast to hamburgers to steaks, along with a daily special. There is also a small convenience section with snacks and drinks. Free Wi-Fi password available on request. Credit and debit cards not accepted; cash and checks only.

In 1870 in Anderson County, a railroad station was built by the Leavenworth, Lawrence, and Galveston Railroad Company. It was known. as High Divide or Ozark Ridge, dividing the waters of the Arkansas and Missouri Rivers. This station, located on the highest point of the railroad from Kansas City to the Gulf of Mexico, was named Divide. After the mail route was laid out in 1858, from Lawrence to Humboldt, a stage coach carrying express and passengers, as well as the mail, followed the route. A stage station was built a little west and south of the Star Schoolhouse, called Halfway House. In 1870 the Post Office was moved to the Railroad Station in Divide. In 1872 new settlers began to arrive in Divide. A town company was formed, an election was held, and the town of Divide was renamed Colony. In September 1963 the first annual Hi Point Rodeo took place. And finally in November 2015, the Hi Point Café & Convenience Store opened giving heritage to the towns history. Several pictures from the Hi Point Rodeo and the Santa Fe Railroad (the name of the railroad at the time of it’s closing) dress the walls. 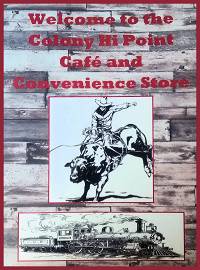